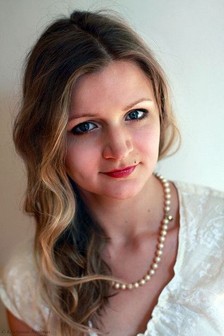 Justina Repeckaite (1989, Lithuania/France) is a composer and vocal improviser based in Paris. Justina studied at Lithuanian Music and Theatre Academy and at Conservatoire of Paris where she also attended contemporary and medieval music improvisation classes as a singer. Her great interest in the medieval culture leads her musical pursuits to geometrical and mathematical concepts.
Justina’s piece Chartres for string orchestra became recommended work at the International Rostrum of Composers in 2013, won the Best Debut Prize of the year in Lithuania and was released in albums.
Her music is performed by such ensembles as Ensemble Intercontemporain, Ensemble Court-Circuit, Ensemble 2e2m, Ensemble WARN!NG, Spectra Ensemble, Moscow Contemporary Music Ensemble and Lithuanian Ensemble Network.
The music of Justina Repečkaitė has many similarities to a diamond. With its hard unforgiving shape and geometric perfection, it creates a profound and striking beauty, which singles her out from many composers of her generation. – Ben Lun

Tapestry(2015) for flute, clarinet, piano, violin, violoncello. Tapestry – a polychromic fabric, was an inspiration for the title of this piece of music, which has a decorative and repetitive character. According to the image of weaver’s art, the compositional principle consists of binding different attacks of sound in order to create a timbre, dynamics and rhythm polychromy in time. Piano has a decisive role and it’s strings are poetically linked to a frame on which the tapestry fabric holds. The percussive attacks of piano are orchestrated by emergence and then disappearance of other instruments. Gradually an accumulation and superposition of pulsations produce a complex rhythm and the role of each instrument is enriche