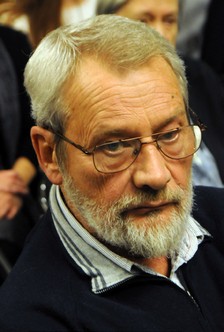 Milan Mihajlović (1945, Serbia). He graduated in Composition and Conducting at the Music Academy, and acquired his master’s degree in composition. He has attended summer courses in Cologne and Salzburg. From 1975 he taught at the Faculty of Music, Department of Music Theory, where he ad-vanced through all positions from assistant to full professor (1994). In 1998 he joined the Composition Department at the same Faculty.
He was Head of Music Theory Department (1984-88), and Dean of the Fac-ulty of Music (2002-2009).
He was President of the Composers Association’ of Serbia (1989—2002). He was also one of the founders of the new Music Ensemble (1992), as well as the founder (1992) and director of the International Review of Composers (1992-2002).
He is the recipient of numerous awards.
Mihajlović’s works are often performed abroad, in concert halls such as Tonhalle in Zürich, Carnegie Hall in New York City, Hall of the Berlin Philharmonic, Steinway Hall in London, Sydney Conservatory Hall, Auditorium of the Dijon Opera; some of his works have been published by major publishers Peters from Leipzig and Brandstätter from Cologne.
He was composer-in-residence at the Chamber Music Festival in Kempten, Germany (2014) and Chamber Music Festival in Dijon, France (2016)…
For the CPO publishing house (cd), Brandenburg State Orchestra and con-ductor Howard Griffits recorded cd and organized a concert with his composi-tions (Frankfurt/Oder – august 2018).

Mihajlović’s work Image was written in 2017 as a setting of poetry by the painter Milena Pavlović Barili (in its original French). Pursuing the idea of a new creative reading of Schoenberg’s Pierrot lunaire (1912) and the many musical palimpsests, inter-pretations, and inspirations spawned by this famous work, on the centenary of its première, Mihajlović also accomplished a less readily noticeable “internal circle” of his creative mission. In his own way, Mihajlović thus combined the narratives of Schoenberg and his hero with his own artistic fate: the central part of Image is a paraphrase of Lamentoso, a work he composed in 1977, the first piece he wrote after completing his MA degree and breaking free from the pedagogical canons of the academia. In the words of the musicologists Zorica Premate, Lamentoso inaugurated Mihajlović’s own style, authenti-cally layered with its own refined musicality and critical approach to contem-porary times and their un-musical phenomena…