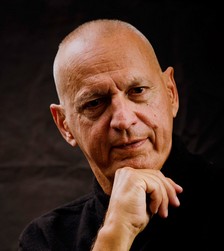 Vladimir Tošić (1949, Serbia), composer, multimedia artist, full professor at the Faculty of Music in Belgrade (1987–2017)
His works are regularly performed on Serbian and foreign concert stages and in festivals of contemporary music throughout the world: in the United States, Germany, Argentina, Brazil, England, France etc.
Works by Vladimir Tošić have been released on multiple CDs in Serbia and the United States. Five of them are authors CDs: Melange (2000), Muzika za klavir (Piano Music, 2014), Muzika za male pija-niste (Music for Little Pianists, 2016), Trajanje (Duration, 2016) and Dual (2017). His piece Voxal won the first prize at Thomas Bloch Competition in Paris in 2000. Tošić also won third prize at the 2011 Gitarrentage für Kinder, a children’s guitar music competi-tion held in Lebach, Germany. His triple album titled Trajanje (Duration) won the 2017 Album of the Year award of the Muzika klasika magazine.
Tošić’s creative approach is based on a reductionist principle of music construction. All of his pieces are processual, repetitive, and based on a rather restrictive number of different elements, sometimes even just one (colour, rhythm, harmony…).
His most important works include Varial, Dual, Trial, Voxal, Fisija (Fission), Fuzija (Fusion), Altus, and Medial, among others.

Multus is a piece in three movements featur-ing all the important traits of my work so far: it is extremely repetitive and pro-cessual, based on the harmonic (aliquot) mode.
The main thematic material – in the first and third movement – is bounded by a four-bar repetitive model dominated by lively motion accomplished by means of a dialogue between the strings and the woodwinds. By means of sequential repetition, variation, and permutation, the basic model gradually shifts and rises, in a constant crescendo, all the way to the culmination. The sonic basis of the model is constructed on a melodic series comprising the notes of the harmonic mode.
The second movement is constructed in the same way, like the first and third movement, except that it exudes a calmer atmosphere and a symetric, tripar-tite, arc-shaped form.
Essentially, the entire piece rests on only two basic lines – the strings’ and the winds’ lines, which are in constant dialogue throughout the piece.
The movements are relatively short – each movement is about three minutes long in performance, because as an author and listener I have sensed for quite a while now that the high concentration of events has made it diffi-cult to maintain the audience’s attention with long durations.