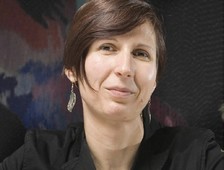 Ana Sokolović (Serbia/Canada) began her studies of composition at the Academy of Art in Novi Sad (supervised by Prof. Dušan Radić), completed her B.A. degree at the Faculty of Music in Belgrade (under Prof. Zoran Erić), and then acquired an M.A. degree at the University of Montreal (supervised by Prof. José Evangelista), where she currently teaches composition.
Her oeuvre in chamber, opera, and orchestral music, fascinating by virtue of its wealth of diverse forms of expression, is often inspired by the luscious asymmetric rhythms of Balkan folk music. Her invention and the freshness of her compositions have left a mark on the contemporary music scene of Quebec and Canada, as well as internationally. Her works in the domain of vocal music have captivated large audiences, such as her opera Svadba (‘Wedding’), which ‘uncovered the universal phonetics of the human heart as a mini-evocation of The Rite of Spring’ (Le Monde). Svadba has been presented at 50 different cities (Toronto, Belgrade, Philadelphia, Aix-en-Provence, San Francisco, Nantes, Luxembourg, Perm, Ljubljana, Montpellier, Montreal, Milwaukee, Baltimore, Hanover…). Her first opera, The Midnight Court, was staged at the Covent Garden, while the upcoming season of 2019–20 will see the première of another opera by Sokolović, commissioned by the Canadian Opera Company.
Orchestral works by Sokolović have been performed by the symphony orchestras of Montreal, Ottawa, Vancouver, Windsor, the Belgrade Philharmonic, Mediterranean Youth Orchestra, as well as several university orchestras.
Chamber music by Sokolović has been commissioned by many ensembles: Aventa Ensemble, Vancouver New Music, Quatuor Molinari, Quatuor Bozzini, New Orford String Quartet, Goldmund (Berlin), Anima (Berlin), Trio Fibonacci, Trio Gryphon, Musica Intima, Thin Edge New Music Collective, Quintette Pantaèdre.
Her music has been performed at various festivals, including Festival d’Aix-en-Provence, Festival Présences (Paris), Nordic Music Days (Nordiske Musikkdager, Reykjavik), Venice Music Biennale, Music Biennale Zagreb, Holland Festival (Amsterdam), aDevantgarde festival (Munich), El Cervantino (Mexico), Diaghilev Festival (Perm), ISCM Music Days (Vancouver).
Between 1995 and 1998, Sokolović won three awards of the SOCAN Foundation’s competition for young composers. In 1999, she won first award at the Canadian Radio competition for young composers in the category of chamber music, as well as its Grand Prix in all categories. In 2005, she was awarded the Joseph S. Strauffer Prize by the Canada Council for the Arts. In December 2009 she won the award of the National Arts Centre in Ottawa, including a five-year residence and professorship as well as a commission. In the season of 2011–2012, her music was celebrated at more than 200 events throughout the country. Her opera Svadba received six nominations and an award in the category of Outstanding New Musical/Opera. In 2015, she won that year’s Serge-Garant Award from the Émile-Nelligan Foundation, while her work Golden Slumbers Kiss Your Eyes won a JUNO Award in the category of Composition of the Year in the Domain of Classical Music, in 2019.
Recordings of works by Ana Sokolović have been released on 12 different discography editions.

Trois études pour piano (1995)
For each of these three piano studies, I chose a different musical parameter:
Study I – rhythm: a four-measure rhythmic model that repeats nine times.
Study II – harmony: exploration of a five-note chord in several registers and positions.
Study III – melody: a single melody in repetition, which is presented at different speeds by means of temporal expansion and contraction.