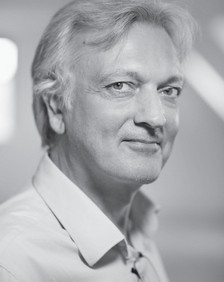 Kim Helweg (1956, Denmark) was initially influenced by the work of Penderecki and John Cage. But a change encounter with American fusion-music later drastically altered his course and led to an extended period of jazz/rock compositions – inspired primarily by Miles Davis, Joe Zawinul and Chick Corea – culminating in a couple of rocksymphonies and the rock-operas Ulysses and Black Mass.
In 1985 and 1988 he won first prize for composition for The Danish Radio Concert Orchestra, and in 1986 his music for the drama The Kreutzer Sonata was awarded a prize in Monaco. By 1988, however, he was again writing for classical ensembles, and his works since that time include a Violin Concerto (commissioned by the Danish Broadcasting Corporation) a Cello Concerto, a concerto for percussion and orchestra Barocco Brasileiro written for the Safri Duo, Dvojnik – a concerto for two pianos and orchestra, 3 chamber concertos, ballets (such as Cupid and Psyche, commissioned and performed by the Royal Danish Ballet and Orchestra on the occasion of the Copenhagen European Capital of Culture in 1996), and Requiem Piazza Duomo for 1.000 performers.
Most recently the ballets The Return of Don Juan, Spiri and Silent Tales and the orchestra pieces Il Madrigale Di Giouanni, Paganini 2000 and Two and Stalingrad Symphonies have been performed, to which we can add presentations at contemporary music festivals in Canada, Finland, Poland, Argentina, Uruguay and in Belgium. Kim Helwegs first opera Stalingrad was performed august 2002.

American Fantasy, For 2 pianos
New arrangement of America Fantasy For 2 pianos and percussion
1st performance of the 2 piano version by LP Duo at October 3rd 2018 by Sonja Lončar and Andrija Pavlović.
America Fantasy was written in less than 2 weeks during springtime 1994. The work is built on the famous song America from the Bernstein musical West Side Story . The piece has a double structure being a sonata in 4 movements and at the same time a row of variations on the rhythmical structure of the song (Close to the idea of another very often performed work by Kim Helweg: Variations on Chick Corea’s LA FIESTA).
The 1st movement is built on the characteristic mixture of 3/4 and 6/8 that transforms in to other meters like 7/8, 9/8, 10/8, 11/8, 12/8 and 13/8 as clearly heard in the opening dynamic fugue. Soon after a contrasting and very slow B section an atonal row, that is used trough out the entire piece, is introduced and after that the opening fugue is repeated.
The 2nd movement is an Adagio – a lyrical fantasy for the pianos based on the well-known tritone from another famous West Side Story tune Maria transformed into a new theme.
The 3rd movement is a Scherzo adding some “funky” aspects of the rhythm organized by serial techniques.
The 4th movement starts with a clapping section based on a 7/4 rhythm variation on the 3/4 – 6/8 pattern. The movement is composed as a metamorphosis and includes a lot of quotations from the composer’s earlier works (like 2nd symphony and Mechanical destruction) and ends up with a big splash of colors and the original Bernstein theme.
Since the 1st performance the work has been an often performed concert piece and was performed in Canada, USA, Argentina, Uruguay, China, South Korea, Denmark, Belgium, Holland, France, Germany, Italy, San Marino, Monaco, Poland, Austria, Serbia, Slovenia, Bosnia Hercegovina, England and Russia. 2019 is the 25 years anniversary of the piece.
The version for 2 pianos without percussion was especially written for the LP Duo with the support from the Danish Composers Society: C Ankerstjerne Music 2019