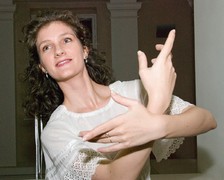 Ana Kazimić (1985, Serbia) graduated from the Academy of Arts in Novi Sad with ballet music Love – power of new rises. She finished Doctoral academic studies of composition at the Faculty of Music, Belgrade, with a dance fantasia Muerto de amor, for vocal-instrumental ensemble, electronics and dancers, supervised by professor Zoran Erić. Currently, she is working as an Assistant in the artistic field of composition and conducting at the Faculty of Arts in Niš.
Ana was the winner of the young composers’ competition held under the auspices of the Triorca project initiated by Norfolk County Council’s Music Service, England. At the International Composition Competition commemorating the 1700th anniversary of the Edict of Milan, her piece was awarded as the best. She was one of five chosen young composers in the world selection for Aurora Fine Arts Festival in Stockholm.
Ana has studied with eminent composers including Krzysztof Penderecki, Sven-David Sandström, Johannes Schöllhorn, Mihaela Vosganian, Paul Pignon.
Ana volunteered at the National Theatre in Belgrade (composition, choreography, dance). Among her dance awards, she singles out the first place at the 2013 World Competition.

Composition Why? comes as continuation of researches in the fields of love and mystery, in which the composer also worked in some previous opuses. It developed from the new encounter with the poem which the author wrote in school days, now awaken through sound medium, in chamber ensemble that consists of female voice, flute, violin and piano. During the process of composing author primarily investigated possibilities of the functional correlations among the diminished harmonies.
Solo poem Zašto? was composed in the year 2018 and at this year’s International review of composers has the premiere performance.