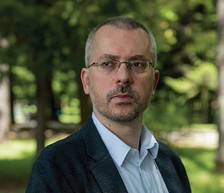 Aleksandar Perunović (1978, Montenegro) graduated from the Music Academy in Cetinje, Department of Composition, under the mentorship of Žarko Mirković, where he also finished his Master studies. He obtained his Ph.D. degree from the same department at the Faculty of Music in Belgrade, under the mentorship of Srđan Hofman. Perunović is the author of large number of solo, chamber, choral and orchestral compositions, as well as the works that emerge from the strict musical expression (musical theater, application of multimedia, electronics, etc.). His music has been performed in Montenegro (festivals A tempo, Budva – Theater City, KotorArt etc.), ex-Yugoslav countries (International Reviews of Composers in Belgrade, Days of Mokranjac in Negotin etc.), and throughout Europe (Internationales Theater in Frankfurt, Museum of Modern and Contemporary art Palais de Tokyo in Paris, Музей Духовних Скарбів Украіни in Kiev, Teatri Migjeni in Shkodra, several cities in Austria, Germany, Netherlands etc.). Many of these works were created as commissions by performers, ensembles or festivals. Perunović works as an Assistant Professor at the Music Academy in Cetinje (Montenegro).

AЯTИAMANTRA IЯOИINORI
Variationen und Reaktion über Klavierstücke I-IV von Stockhausen
Artnamantra ironinori (2018) is an electro-acoustic-performative work for one or two pianos and electronics. As it is evident from its title and subtitle, this piece contains a reference to Karlheinz Stockhausen’s music in more than way. Namely, the title refers to his compositions Mantra and Inori (the allusions do not refer to the musical content of these pieces, but predominantly to the meaning of the words themselves), whereas the subtitle explains the background creative idea in somewhat more precise terms: it is, actually, about variations on Stockhausen’s Piano Pieces I-IV.
One of the most particular features of this multi-media work is reflected in the fact that nothing has been composed in it (strictly speaking). Moreover, not a single note has been written. There are only instructions for performing and a recorded sound materials which consists mainly of electronically-serially-punctualistically “orchestrated” Stockhausen’s piano pieces. After the first three pieces follow the “variations” (in particular: the improvisations performed on the basis of given instructions), and after the fourth – a cathartic “reaction”.