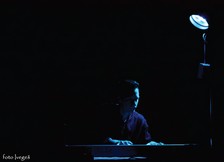 Ljubomir Nikolić (Serbia) began his studies in the class of Miroslav Štatkić at the Music Composition Department of the Academy of Art in Novi Sad and completed his degree under the supervision of Rajko Maksimović.
The composer identifies cultural heritage as an inexhaustible source of material for reinterpretation at the present time. Communication and interaction, as two important elements that the composer relies upon in his work, are especially reflected in his efforts and work on a relatively new ‘artistic form’ – the theatrical adventure game – as part of an EU project titled Journey to the Beginnings. It is an interactive installation – game – exhibited in museums in Hungary, Serbia, Croatia, and Romania, thanks to a collaboration involving archaeologists (University of Southampton), music archaeologists (Vienna), artistes (Budapest), and IT experts (Zagreb), culminating in a unique AR/VR exhibit, performance, and piece of music.
Nikolić’s symphonic work Musica Assoluta (2017) opened the musical segment of the 37th NOMUS festival. Arche, a piece for flute, was performed in Ljubljana (Slovenia) and Trieste (Italy) by Marija Pilipović. Works by Nikolić have also been performed in Europe and America.

Emulations for clarinet and accordion (2018)
‘…I am a tombstone, an image. Seilikos placed me here as a long-lasting sign of deathless remembrance.’ [Quoted and translated in Thomas J. Mathiesen, Apollo’s Lyre: Greek Music and Music Theory in Antiquity and the Middle Ages (Lincoln: University of Nebraska Press, 1999.] Thus reads the indication on the tombstone of the ancient Greek composer and poet Seikilos. It is precisely this segment of the text from the tombstone that forms the initial part of the work’s musical material.
The initial idea for the making of this piece is presented through communication. Communication as the central phenomenon of the modern age, as well as an activity dating back to pre-historical times, here serves to connect the work’s ‘musical’ and ‘non-musical’ thematic materials. Considering the postmodernist approach inadequate for the development of the main idea, the composer resorted to the notion of emulation.
Emulation constitutes imitating the working of a programme on a platform different from the original. Here, it concerns ‘emulating’ Seikilos’s musical theme, which is inserted into the context of modern times, as well Seikilos’s optimistic text about the joys of life. There arises the issue of ‘deciphering’ the mode in which Seikilos composed his piece, still debated by music theorists.
Nikolić’s piece constitutes a peculiar effort to address the problem of cultural heritage, that is, ancient art, and the composer’s subjective perception thereof.