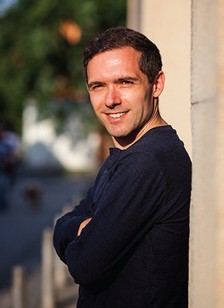 Zvonimir Nagy (Croatia/USA) is a Croatian-born American composer based in Texas (USA) where he serves on the music faculty at Tarleton State University (Texas A&M). He holds a Doctor of Music in Composition degree from Northwestern University. Nagy composes acoustic, choral, electroacoustic, and multimedia music. His compositions are informed by cognitive and computer sciences, with a focus on the relationship between music and embodiment. His compositions also employ computer-assisted processes for music composition, notation, and analysis, as well as self-referential and dynamic systems, along with more intuitive approaches to compositional techniques and processes. Nagy is the recipient of the Seattle Symphony Composition Prize, the Iron Composer Award, and the Swan Prize in Music Composition. His music is released on PARMA Recordings, Albany Records, and MSR Classics; a selection of his compositions is published by Aldebaran Editions, Musik Fabrik, and Paraclete Press.

Angelus for organ is a quiet and atmospheric piece with overt minimalist influences. The Angelus is one of the significant Christian devotions, and traditionally this call to prayer would be evoked by the ringing of a bell. In the music, one can hear the gently tolling, repeating patterns change gradually throughout. Composed in three sections, Angelus gradually unfolds a simple phrase consisting of a few chords, that albeit similar in construction, create a transformative musical space. In a vocalize-like manner, the resulting melodies in the violin part further support this harmonic design, conveying a sense of mystery.