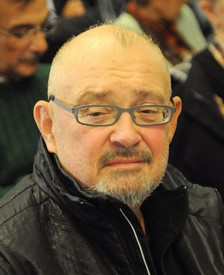 Vlastimir Trajković (1947–2017, Serbia) earned his BA (1971) and MA (1977) degrees in composition at the Music Academy in Belgrade, in the class of Vasilije Mokranjac. In 1977, he worked with Witold Lutosławski at the summer course in Grožnjan, Croatia. In 1977–78, funded by the French government, he studied with Olivier Messiaen in Paris. In 1971, he began teaching subjects in music theory at the Stanković School of Music and then in 1980 joined the Faculty of Music Art in Belgrade as professor of composition and head of the composition department for many years. In 2000, he was admitted to the Serbian Academy of Sciences and Arts as a corresponding member and was made a full member in 2009.
His stylistic orientation was determined already in his youthful works, which feature a consistent combination of Debussyian impressionism, Messiaen’s spheres of content and system of modes, with admixtures from rock and jazz. In his pieces, Trajković also affirms a postmodernist artistic orientation. In Arion, nova muzika za gitaru i gudače (Arion, New Music for Guitar and Strings, 1979), his most frequently performed piece, he proclaimed the procedure of repeating simple, reduced material, anticipating the emergence of minimalism in Serbian music. In Trajković’s oeuvre, the piano pieces are especially noteworthy: Četiri nokturna (Four Nocturnes, 1972), Zvona (Bells, Op. 5), and Za početnike, dve etide za klavir (For Beginners, Two Piano Studies, Op. 9). This area of his work also features the characteristics of his personal style: crystal-clear forms, a striking, extremely extended harmonic language, complex metrics, as well as a refined feeling for instrumental and orchestral colour. The following works have also been noted: Tempora ratenta, a symphonic study; Dan (Day), four hymns for orchestra; Duo for piano and orchestra; Klavirski koncert (Piano Concerto), Koncert za obou (Oboe Concerto), Pet lakih komada za harfu solo (Five Easy Pieces for Solo Harp, Op. 22), Arija i igra za alt-saksofon in Es i klavir (Aria and Dance for Alto-saxophone in E flat and piano, Op. 15), Deset preludijuma za gitaru (Ten Preludes for Guitar, Op. 10), and Pet pesama Stefana Malarmea (Five Poems by Stéphane Mallarmé) for guitar and orchestra, Op. 29.

Epimetheus was composed by Vlastimir Trajković in 1977. Simplicity in modernity and effective expression characterise his entire oeuvre, including this work, his only piece for the organ. Inspired by the mysticism of Greek mythology, Trajković named this organ Titan of his Epimetheus, who was one of Titan’s sons in Greek mythology.
The conception of the opening movement corresponds to the mythological name of Epimetheus – ‘one who thinks afterwards’. The movement begins with a rhythmic motive that, according to the author’s indication should be played ‘gently, but not overly so’, which is relentlessly repeated another 54 times right to the end of the piece, where, in a four-bar pedal ‘collapse’, it pours out into the final cluster (which, as the author specifies, ‘should scream like at the outset’). The melody in the right hand is accompanied by the following instructions from the author: ‘shouting, quite violent and piercing, extensive and expansive, articulated as much as possible’. The melody, in sustained dissonant chords, is allocated to the pedal and, with its voluminous sonority, supplies an overall balance to the piece.
The introduction to the second movement, Pandora’s Box, harbours a strange kind of atmosphere, with notes sneaking around in high registers with pronounced harmonics, so that real pitches are avoided. Chordal-intervallic movements at this point call for a constant legato and their texture grows in complexity, ‘step by step’, from two parts, gradually culminating in a massive cluster. This cluster goes on for long enough to accommodate 14 instances in which, at regular intervals, the sound grows in intensity, up until the moment when Pandora opens her box, unleashing all those sorrows and misfortunes to fly in every direction of the world. Trajković imparts a ‘terrible power’ to this chordal section amid ‘stunning slowness’, as he wrote, and following just nine bars, suggesting thereby just how little time it takes to commit an irreversible mistake, he accelerates the tempo and takes us into the animé, which grows into a mighty song, a pacification combining not only Pandora’s curiosity and reconciliation with fate, but also that tiny ray of hope that stayed on the bottom of the jar.
The spirit of hope, or Elpis in Greek, appears in the third movement. In ancient times, too, Elpis engendered many a dilemma. Is she the spirit or demon of hope, a source of comfort or blind hope deceiving humanity? Using musical metamorphoses, Trajković seeks to decipher the concept of Elpis. The readily recognisable quintuplet and sextuplet motive reappears, pulsating, with the pedal melody unobtrusively unfolding below it. Supported by flute stops in various registers, with the same pulse now only in the left hand, the right hand screams out a melody that will attempt to threaten the course of the lower part, which keeps rising, gradually, heightening the tension of the entire movement. Just five bars before the final collapse of this relentless pulsation, in ff dynamics, there appears a melodic movement, likewise in forte fortissimo, which, as the author specified, ‘should be heard through the sound mists of other plays’, that is, melodies. He manages to achieve such an impression, too, by means of an incredible combination of quintuplet motion, above a pedal cluster, using all four major stops, the reeds, but also including the trumpets. The illusion does not disappear, and the final 22 bars, which combine all of the preceding sound in a mighty chord played on the manuals, below which the pedal sings its closing words, tell us that all the answers are hidden in ourselves.

Maja Smiljanić Radić,
professor of organ at the Faculty of Music in Belgrade