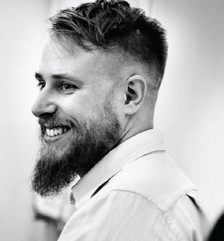 Luka Čubrilo (Serbia) is a doctoral student at the Faculty of Music in Belgrade, under the supervision of Prof. Isidora Žebeljan.
Works by Čubrilo have been performed at several festivals, including Lasciar vibrare, KoMA, FESTUM, the International Review of Composers, and Belgrade International Cello Fest.
His piece titled Ritual won first prize at the 2010 International Summer Academy, awarded by Klangforum Wien.
Isihija, a piece for chamber orchestra, was performed in 2014, under the auspices of the project Savremena kompozicija u Vojvodini (Contemporary Composition in Vojvodina). Čubrilo also made a version for Trio Attacca, a chamber ensemble based in Belgrade.
The piece Zamrznuto u vremenu (Frozen in Time) was premièred by Trio Singidunum in 2016. There is also a version for accordion, violoncello, and piano (FESTUM 2016).
Čubrilo is also active as a performer in special theme concerts, which he also organises; projects of the association Nebograd; and the festivals Lasciar vibrare, KoMA, and FESTUM. As a chamber performer, he has participated in performances of Olivier Messiaen’s Quatuor pour la fin du temps (Quartet for the End of Time) and Atlas troje (An Atlas of Three), a sound poem by Aleksandar Šurbatović and Vladimir Korać.

Inégal, Transformations for cello solo
The term inégal from the composition’s title refers to the source of inspiration being French baroque. The term also stands for asymmetry that may be found in different layers of the musical content. Such asymmetry is visible in form of a displaced accents in rhythm and metre, and can be found in sharp contrasts between the gallant character (weak) and expressive archaic character (strong).
The creative reading of the principle of inégal and the application of baroque ornaments has opened the door to transformation of different musical samples and their integration into my very own musical language. Such an approach allows for a fragment of François Couperin’s viola da gamba sample to enter into a discourse with the contours of Messiaen’s mystical melody, and for baroque rhytmical figures to function within complex time signatures. The transformations are also present in the sphere of alteration of timbre by employing extended playing techniques and enrichment of ornements with the use of harmonics. The idea behind it is to offer a personal creative reading of viola da gamba’s timbre into a new extended context.