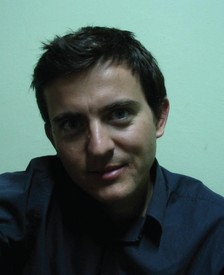 Milan Aleksić (1978, Serbia) acquired his B.A. degree in composition at the Academy of Art in Novi Sad. He pursued further training in the master’s programme at the same institution, the Faculty of Music in Belgrade (Fakultet muzičke umetnosti u Beogradu), The City University of New York, University of Music and the Performing Arts, Vienna (Universität für Musik und darstellende Kunst Wien), and Hanns Eisler College of Music (Hochschule für Musik Hanns Eisler Berlin). He earned his doctoral degree at the Faculty of Music in Belgrade.
In 2004 Aleksić joined the faculty of the Academy of Art in Novi Sad. As a teaching/research fellow, he has also worked at the University of the Arts in Berlin (Universität der Künste Berlin) and its Klangzeitort Institute for New Music (Klangzeitort Institut für Neue Musik) in 2015, the Preschool Teacher Training College in Novi Sad (Visoka škola strukovnih studija za obrazovanje vaspitača u Novom Sadu) in 2013–2014, The City College of New York, the Harvestworks Digital Media Arts Center (USA) in 2009, Radio Television Novi Sad (2003–2004), and Josif Marinković School of Music in Zrenjanin (2000–2003).

Wall is a song from a cycle of songs by Aleksić. The starting point of this cycle comprising 14 songs (thus far) is four short poems by Vasko Popa.
The cycle (has) emerged over a time span exceeding 15 years and all of its 14 songs exist in multiple and considerably different versions.
Popa’s poetry is replete with meaning; over the years, my understanding of it has changed, hence the multiple musical settings of one and the same text. It seems to me that this game has only begun.
The song to be performed here is no. 4 from the cycle of Vasko Popa settings, in its third musical version.