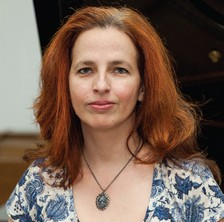 Svetlana Savić (1971, Serbia) is an Associate Professor and the Head at the Composition Department of the Faculty of Music in Belgrade. From 2011 she is a lecturer at the Interdisciplinary studies at University of Art in Belgrade. She has collaborated with renowned
Serbian and foreign performers, ensembles, and orchestras. Her compositions were commissioned for Belgrade Music Festival (BEMUS), International Review of Composers, Cello Fest and other festivals in Serbia, USA, Austria, Italy, Germany, France, Israel, Lithuania,
Russia, Greece, Japan, South Africa…
Her major works include The Poor Sad Don Juan’s Daughter for soloists, women’s choir, and electronics, Quincunx for string orchestra, Sustineo for symphonic orchestra, Songs about Stars for women’s choir and chamber orchestra, Sonnets for female vocal, violoncello, piano, and electronics and Beings Without Faces for soloists, mixed choir and string orchestra.
Svetlana Savic won Stevan Mokranjac prize for 2014 and review Musica Clasica’s Composer of the Year 2016.

Godzila for mezzo-soprano and accordion, a setting of a poem by Jelena Marinkov (from her collection of poems titled Sugarfree), was composed for Ana Radovanović and premièred at the ReConstruction 2 Festival of contemporary music on 14 February 2019.