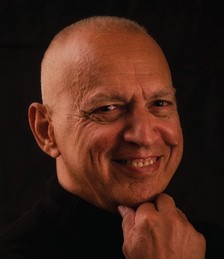 Vladimir Tošić (1949, Serbia), composer, multimedia artist, full professor at the Faculty of Music in Belgrade (1987–2017)
His works are regularly performed on Serbian and foreign concert stages and in festivals of contemporary music throughout the world: in the United States, Germany, Argentina, Brazil, England, France etc.
Works by Vladimir Tošić have been released on multiple CDs in Serbia and the United States. Five of them are authors CDs: Melange (2000), Muzika za klavir (Piano Music, 2014), Muzika za male pija-niste (Music for Little Pianists, 2016), Trajanje (Duration, 2016) and Dual (2017). His piece Voxal won the first prize at Thomas Bloch Competition in Paris in 2000. Tošić also won third prize at the 2011 Gitarrentage für Kinder, a children’s guitar music competi-tion held in Lebach, Germany. His triple album titled Trajanje (Duration) won the 2017 Al-bum of the Year award of the Muzika klasika magazine.
Tošić’s creative approach is based on a reductionist principle of music construc-tion. All of his pieces are processual, repetitive, and based on a rather restrictive number of different elements, sometimes even just one (colour, rhythm, har-mony…).
His most important works include Varial, Dual, Trial, Voxal, Fisija (Fission), Fuzija (Fusion), Altus, and Medial, among others.

Motus 2 – Concerto for Piano and Orchestra, Second Movement
Motus – a duo for piano and orchestra, was composed in 2009 at the suggestion of my dear colleague Vladimir Cvijić, with whom I have collaborated with much success since 1993. The same year, 2009, he premièred the work at the Interna-tional Review of Composers with the Symphony Orchestra of the Serbian Broad-casting Corporation led by Maestro Bojan Suđić.
Since the work was well received, Vladimir soon suggested that I should com-pose a second and third movement and thus put together a concerto for piano and orchestra. The second movement was thus composed in 2015, followed by the third in 2016.

The Second Movement conjures a peaceful atmosphere, attained through a sort of repetitive contrapuntal dialogue between the soloist and the orchestra. The soloist’s part is primarily answered by the woodwinds. The movement is dominated by light scalar movements and the form is tripartite.
Like all my works, this one, too, is processional and repetitive, and belongs to the third phase of my oeuvre (after 2010), which introduced a new kind of sonority and communicativeness into my work.

The composition Medial 6 for chamber orchestra is a composition in three movements created on liberally treated mediant links, which is where the title comes from, and is formed on very liberal variations of the original material. The pace of life today and the constant tension around us seem to have greatly ex-hausted our patience, and you can easily perceive a general tendency towards shorter compositions – sometimes only a minute long! Since not even I have enough patience to listen to compositions that are too long, at this moment I, as an author, have turned to shorter formats. As a result, a series of short composi-tions (lasting 2-3 minutes) was created with a common name, Medial. These short compositions, for various soloists and small ensembles, have been created in past 10 years, in my third composition phase. They can be performed individ-ually, but they also can be combined in small cycles (Medial 623. Medial 745…).
Medial 6 features some readily identifiable traits in my oeuvre, first and foremost repetitiveness and processuality, but in a more communicative way than my earlier works.
My collaboration with Ulli Götte and Ensemble in Process began some 15 years ago, so they have already performed this piece in Germany several times.