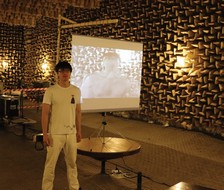 Chatori Shimizu (1990, Japan/Germany) composer, shō performer and sound artist, who constructs his works for a wide range of mediums concerning the time identity in sound. Ranging from orchestral works to sound installations, all of his works engage in repetitive patterns of sound motifs, which aims for the slightest change in the pattern to act as an accent. As the First Prize Winner of the 2016 Malta International Composition Competition, Shimizu’s works have been performed and exhibited throughout more than twenty different countries by acclaimed ensembles and musicians such as AuditivVokal, Linea, Multilatérale, Mayumi Miyata, mise-en, Mivos, Shanghai Philharmonic Orchestra, Sound Factory Orchestra, among others. His music scores are published from United Music & Media Publishing, Belgium.
Upon receiving the Professional Diploma in Piano Performance with High Honors at age twelve, he studied computer music and composition at Kunitachi College of Music, Tokyo, graduating with the Arima Prize. He received his MFA from Columbia University, New York City.He serves as Co-Artistic Director of Composers’ Collective Tesselat.

Fiddle for string quartet
J.J. Grandville, also known as Jean Ignace Isidore Gerard, is a 19th Century French caricaturist. His notoriety is not high, but I believe no one will be spared of bewilderment after seeing his dreamy works. Inspiration for fiddle came on me after seeing Grandville’s work Apocalypse du ballet, which expresses continuous patterns of transformative objects in a sense of disorienting beauty. Repetition of a single motif is the key concept of fiddle. By obsessively repeating a pattern, a slightest adjustment in the detail or a sudden silence can act as an accent. In 2016, “fiddle” won First Prize in Malta International Composition Competition, and was published by United Music & Media Publishers (Belgium).