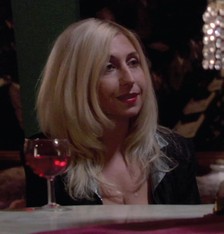 Nataša Bogojević (1966, Serbia/USA) studied composition and piano at the University of Arts in Belgrade.
Since 1995 she lives in Chicago where she has been on the faculty of De Paul University and her own music studio Musica Natasha.
Musical opus of Nataša Bogojević includes works for symphony orchestra, solo instruments, chamber ensembles, choral and vocal pieces, electronic and computer music, ballet and numerous scores for theatre and film. Major soloists, ensembles and orchestras in Europe, former Soviet Union, Australia, Canada and USA commissioned and performed her music.
Natasha Bogojevich is the recipient of many awards for composition (October Prize of the City of Belgrade, UNESCO’s Rostrum of Composers in Paris, The Joseph Jefferson Award ,Chicago).
Her biography appeared in all editions of Who is Who, USA as well as in The World of Woman in Classical Music by Dr. Anne K. Gray, Seven Locks Press etc.

Sonority of Kafana for violoncello, violin, accordion, piano and bassoon
Kafana is complex and multi leveled cultural and urban phenomenon. The first “Kafana” was opened in 1522. in Belgrade, according to the historical data, long before it happened in London, Paris and Vienna. The Turks have opened the first “Kafana” in Belgrade’s historic district Dorcol.
Kafana (a kind of traditional taverns nowadays) became the center of cultural, economic, social and political life, a place where intelligence gathered, poetry bloomed, political parties met and held important debates, many theater troops had plays and musicians held concerts there. Kafana became an institution of national interest. It is difficult to imagine anything else that posses amazing synthesis of West European, Oriental, Balkan, Eastern European and original Serbian cultural elements. After many centuries “kafanas” in Serbia today still hold specific historical distinction.
The Sonority of Kafana was written in May of 2018 in Chicago. It is dedicated to Nemanja Stankovic and friends who play with him. Cello is the “leader” of the “band” and its solo initiates musicians to follow. In Balkan folk music this would be “call and response”. Quasi folk tune sounds almost recognizable but the “band” comprised of “strange” tone colors changes the flow of music. The Sonority of Kafana is the world of bizarre synthesis of Balkan folk music and American minimalism.