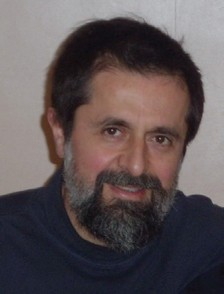 Predrag Repanić (1958, Serbia) began studying music privately and then, thanks to a scholarship from the University of Arts in Belgrade, earned a B.A. and M.A. degree in composition under the supervision of Prof. Srđan Hofman at the Faculty of Music in Belgrade. Repanić has composed works in various forms and genres, vocal and instrumental, from solo to symphonic works. His works have been performed multiple times at events, concerts, and festivals in Serbia and abroad, such as Muzika u Srbiji (MuS, Music in Serbia), Tribina muzičkog stvaralaštva Jugoslavije (Review of Yugoslav Musical Creativity) in Opatija, the International Review of Composers in Novi Sad and Belgrade, Europhonia Festival in Zagreb, Open Music Festival in Milan, Musical Evenings of Belgrade Radio 3, the concert cycles of the Belgrade Philharmonic, East-West Festival in Argentina, etc. Repanić was one of the finalists at the 2016 Prix Europe Broadcasting Festival in Berlin. Most of his pieces have been recorded and their studio recordings are kept in the sound archives of the Serbian Broadcasting Corporation (RTS) and the Sound Studio of the Faculty of Music in Belgrade. These performances and recordings were made by renowned ensembles and performers (M. Jagušt, S. Robinson, S. Belić, L. Stanković, Lj. Jovanović, I. Laszko, E. Ačkun, A. Grgin, G. Arbonelli, Darinka Matić Marović, among others.). Repanić has won multiple awards at the anonymous competitions of the Composers’ Association of Serbia. He has won the following public awards for musical composition: Josip Slavenski Award, the Student October Prize, and the Vasilije Mokranjac Fund Award. Thanks to a stipend from the German Institut für Neue Musik und Musikerziehung, he attended the 35th Darmstadt Summer Course (1990), where he went to lectures by H. Lachenmann and I. Xenakis, and took an active part in the course of B. Ferneyhough. Repanić also works as a pedagogue and theorist. Following a study period in Berlin (1993), he passed his Habilitation as a professor of Counterpoint and Music Analysis at the Faculty of Music in Belgrade. Repanić has presented at a number of Serbian and international conferences on music theory and analysis and published multiple scholarly articles on contrapuntal theory.
Dr Wolfi and Mr Haydn in a new episode:

Sonata (quasi una fantasia) – non facile, per pianoforte e orchestraoke
ossia
Moz-Art à la Haydn et vice versa (although others had a hand in it, too)
the concept:
1. confusion (ossia mimesis)
2. collision (ossia genesis)
3. collaboration-cooperation (ossia synthesis)
and there’s a cadence/cadenza in there somewhere as well…
The multi-paraphrase layer was put together following Viennese reflections and uses material from the following works:
W. A. Mozart: Piano sonata KV 310
Piano Fantasia KV 475
Serenade KV 525
Piano sonata KV 545
J. Haydn: Piano sonata HOB XVI no. 35
although the spirit of Beethoven was also floating above…
The electronics were added at the studio of the Faculty of Music in Belgrade, with technical assistance from Vladimir Korać.
The piece is dedicated to all the fake doctors and other plagiarisers in Serbia and beyond!
In lieu of a commentary, it will suffice to read the work’s lengthy title (with elements of a verbal canon or riddle) and the shorter explication in the subtitle. Along with these necessary bits of information, the element of surprise is something that I count on as part of communicating with the audience in the performance of this work. The work was premiered in Zurich in April 2019 by the pianist Ivan Bašić.