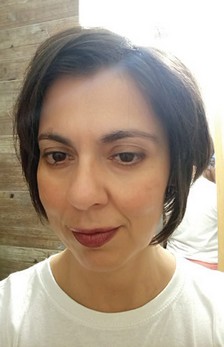 Fani Kosona (1969, Greece), composer, pianist and math­ematician, holds a degree in Mathematics from the University of Athens. She studied piano in the National Conservatory of Athens, in the Ecole Normale de Musique de Paris, then with Bernard Ringeissen; counterpoint and fugue in the Conservatoire National Supérieur de Musique de Paris (classes with J.-P. Holstein and M. Merlet); orchestration in the Scola Cantorum in Paris (classes with P. Sciortino); composition with Theodore Antoniou.
Ph.D. in music composition (Ionian University of Greece), her recent work is focused on mathematical modeling in music composition, introducing the concept of “topological design” as a generalization of micro-structural concepts, resulting to a broader concept of the musical form and structure; also proposing, through catastrophe theory models, a dynamical generalization of deconstructive attitudes in the micro and macro-structural level.
Her music has been awarded in composition competitions and workshops, and is increasingly appearing in discography.

Flow imprints for violin and piano
The piece (2016) aspires to catch the fleeting image of a fluid surface – like the surface of a river or a creek – by “taking 3D imprints” of it as it flows (‘Flow Imprints’).
The structure of the piece is based on a mathematical model of catastrophe theory, controlling intensity, pitch and timbre (the latter in terms of levels of timbre distortion), thus producing sketches / textures of the ‘imprints’ as entities out of time. Then time and the rest of musical parameters are manipulated ‘freely’, aiming to support the creation of a meditative atmosphere and to promote aspects of the whole experience of observing fluidity: different states, flow intensities and qualities, different angles and ways of touch or refractions of light on the liquid surface.