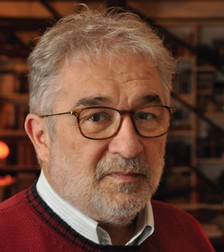 Zoran Erić (1952, Serbia) acquired his BA and MA degrees in composition at the Faculty of Music in Belgrade. For a short time, he also studied at the Orff Institute in Salzburg and in Witold Lutosławski’s master-class in Grožnjan, Croatia. His works have been performed in almost every country in Europe, in the US, China, and Australia, by renowned Serbian and foreign ensembles. He is a full professor at the Department of Composition at the Faculty of Music in Belgrade; in addition, he has taught master-classes and seminars at the Guildhall School of Music and Drama in London and at Iressia in Athens. Between 1992 and 1998, he was a vice-dean of the Faculty of Music in Belgrade, and between 2000 and 2004 a vice-rector of the University of Arts in Belgrade and chairman of the Board of SOKOJ, the Serbian organisation for protecting intellectual rights in music. Between 2007 and 2015, he was head of the Department of Composition at the Faculty of Music and became. Between 2015 and 2018 he was rector of the University of Arts in Belgrade.
In Erić’s oeuvre, a special place is occupied by incidental and film music. He has collaborated with some of Serbia’s most prominent theatre makers, such as Sonja Vukićević, Gorčin Stojanović, Nikita Milivojević, Vida Ognjenović, Nebojša Bradić, Ivana Vujić, Milan Karadžić, Haris Pašović, Dejan Mijač, Boro Drašković, Egon Savin, and others.
Erić has won a number of prizes and awards, most notably the October Award of the City of Belgrade, YUSTAT Grand Prix for incidental music, two Golden Mimosas for film music, two Sterija Awards for incidental music, and the Great Gold Medal of the University of Arts in Belgrade. He is a triple laureate of Serbia’s most prestigious award in the domain of music – the Mokranjac Award.

Dedication to the Nature for Flute
Gaius Plinius Secundus, 23-79
Historiae Naturalis, Book 37, Section 206
Salve, parens rerum omnium Natura,
teque nobis Quiritium solis celebratam esse numeris omnibus tuis fave.
Greetings, Nature,
mother of all creation,
show me your favour in that I alone of Rome`s citizens have praised you in all your aspects.
Translation from latin John F. Healy
Publisher DosijeStudio (Editor-in-Chief Dušan Mrđenović)
The piece is formed of 6 sections indicated by numbers 1-6.
Performer decides about the order of playing sections although the written order is preferable. Each section (whole, obligatory) is played only once and may not be repeated.