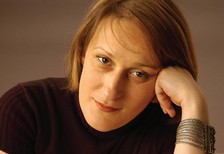 Isidora Žebeljan (1967, Serbia) first attracted international acclaim with her opera Zora D., commissioned by the Genesis Foundation from London. It was premièred in Amsterdam in 2003, in a staging directed by Sir David Pountney and Nicola Raab. The same year, that production opened the 50th season of the Vienna Chamber Opera (Wiener Kammeroper). Ever since, Žebeljan has enjoyed a steady stream of commissions from renowned institutions and music festivals, such as the Venice Biennale (Konji Svetog Marka, iluminacija za orkestar / ‘The Horses of Saint Mark, an Illumination for Orchestra’, 2004), Bregenz Festival (Maratonci / ‘The Marathon’, an opera, 2008; Zujte strune / ‘Hum Away, Strings’ for symphony orchestra, 2013); Genesis Foundation London (Pesma putnika u noći / ‘Song of a Traveller in the Night’, for the opening of Bill Viola’s 2003 exhibition at the National Gallery in London, 2003; Skomraška igra / ‘The Minstrel’s Dance’, composed for the Academy of St Martin in the Fields, 2005); University of Kent (Polomka Quartet, 2009); Gelsenkirchen Opera (Musiktheater im Revier Gelsenkirchen; the operas Simon izabranik / ‘Simon the Chosen One’, 2009 and Nahod Simeon / ‘Simeon the Orphan’, 2015); Netherlands Chamber Choir – Nederlands Kamerkoor (Latum lalo, 2010); Accademia Musicale Chigiana Siena (the opera Dve glave i devojka / ‘Two Heads and a Girl’, 2012); the City of London Festival (Kad je Bog stvarao Dubrovnik / ‘When God Made Dubrovnik’, 2013); Berlin Philharmonic Foundation (Klin-čorba / ‘Needle Soup’, 2015); De Eduard van Beinum Stichting / Eduard van Beinum Foundation (Tri čudne ljubavi / ‘Three Strange Loves’, a concerto for violin and chamber orchestra, 2017; Psalm 78 for mixed choir, 2017), etc.
Žebeljan has composed for some of the most renowned music ensembles, such as the Wiener Symphoniker, the Academy of St Martin in the Fields, Brodsky Quartet, Netherlands Chamber Choir, and London Brass. Her works are regularly performed throughout Europe, Israel, East Asia, America, and Australia, at events such as the Venice Biennale; Bregenz Festival; White Light Festival (Lincoln Center, New York); Rai NuovaMusica festival; City of London Festival; Godella International Chamber Music Festival in Valencia (where she was composer-in-residence in 2019); Festival Classique Den Haag; Klarafestival in Brusels; Galway Arts Festival; Tallin Summer Music Festival; WDR-Musikfest; Settembre musica in Turin and Milan; Settimana Musicale Senese; Stift International Music Festival (where she was composer-in-residence in 2017); Höri Musiktage Bodensee; ISCM festivals in Zagreb, Gothenburg, Wroclaw, and Vancouver; Music Biennale Zagreb; KotorArt festival; BEMUS, etc.
Other ensembles and artists who have performed music by Žebeljan also include the BBC Symphony Orchestra; Gothenburg Symphony Orchestra (Göteborgs Symphoniker); RAI National Symphony Orchestra (Orchestra Sinfonica Nazionale Rai) in Turin; Janacek Philharmonic Ostrava (Janáčkova filharmonie Ostrava); Royal Philharmonic Orchestra of Galicia (Uxía & Real Filharmonía de Galicia); Helsingborg Symphony; Haydn Orchestra; I Solisti Veneti; the conductors Paul Daniel, David Porcelijn, Claudio Scimone, Michael Seal, Peter Dijkstra, Christoph Poppen, and Pierre-André Valade; the horn player Stefan Dohr; the clarinettists Joan Enric Lluna and Alessandro Carbonare; the violinist Daniel Rowland; the pianists Nino Gvetadze and Oliver Triendl, and many others. Also, Žebeljan regularly performs as a conductor and pianist. Among other places, she has conducted at concerts in London (with the Academy of St Martin in the Fields) and Amsterdam, and as a pianist she performs with the Brodsky Quartet. Exclusive rights to publish music by Žebeljan are held by Ricordi-Universal Milan and Donemus (Netherlands).
In 2009, the Berlin weekly der Freitag named Isidora Žebeljan as one of its ten most promising public figures that year. In 2011, the German label CPO released a CD with a selection of orchestral music by Žebeljan and in 2015 another CD, with her chamber music for strings, recorded by the Brodsky Quartet, while the London-based label Oboe Classics released a CD with Žebeljan’s chamber music for wind ensembles in 2013. Also, Žebeljan has been very successful in the domain of theatre and film music, winning three Sterija Awards and a grand prix at SoFest, a film festival in Sopot, Serbia.
Isidora Žebeljan studied composition at the Faculty of Music in Belgrade with Prof. Vlastimir Trajković, a member of the Serbian Academy of Sciences and Arts. In 2002 she became a professor of composition at the same school. In 2006, she was admitted to the Serbian Academy of Sciences and Arts (becoming a full member in 2012), and in 2012 became a fellow of the World Academy of Art and Science (WAAS). In 2014, Žebeljan was the first Balkan artist to receive the award of the Parliamentary Assembly of the Mediterranean for making a contribution in the domain of art.

When God Made Dubrovnik for mezzo-soprano and string quartet, a setting of a poem by Milan Milišić, was commissioned by the City of London Festival and composed in 2012 for the Brodsky Quartet, as part of their project titled Trees, Walls, Cities. The original version of the piece was premièred at the opening concert of the City of London Festival on 24 June 2013, which was broadcast live by BBC Radio 3. The performers were Lore Lixenberg and the Brodsky Quartet. The same ensemble subsequently performed the piece in concerts in the UK, Netherlands, Cyprus, Israel (Jerusalem), and Croatia (Dubrovnik), made a recording of it for Chandos Records (UK). The second, modified version of the piece will be premièred at the 2019 International Review of Composers.
‘I wanted to give another life to these lines by the ethnic Serb poet Milan Milišić, a native of Dubrovnik, who tragically perished in that city at the very beginning of the war in 1991, killed by a bomb fired by the Serbian army. His death was another proof of the utter senselessness of war and dehumanisation in war, while his poems, despite his tragic fate, endure and help us to get by, survive, save ourselves.’