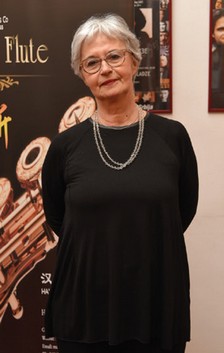 Ivana Stefanović (1948, Serbia)
Stefanović specialised at IRCAM in Paris.
She worked on musical broadcasts at Radio Belgrade and its Drama Section, where she edited the broadcast Radionica zvuka (Sound Workshop).
She lectured at the Centre for Women’s Studies in Belgrade. She was the director of the cultural programme at the Centre for Democracy Foundation, artistic director of the BEMUS festival, and State Secretary at the Ministry of Culture of the Republic of Serbia.
Currently, she runs the Centre for Action in Music.
Works by Stefanović have been performed throughout the region and Europe, the Middle East, Australia, Canada… and at festivals such as Gaudeamus, BEMUS, Zagreb Biennale, Helsinki Biennale, Prix Italia, Music Harvest Odense, New Music Week Bucharest, ISCM…
She has also been active in boundary areas of music, including radiophony and stage music.

Whither with the bird in the palm for percussion ensemble and tape
The electronic part of this piece was made in 1979, during my stay at IRCAM in Paris, while postproduction was done at the studios of Radio Belgrade (by Zoran Jerković). The work was composed on the initiative of the Percussion Ensemble from Ljubljana led by Boris Šurbek and was first performed as part of the Musical Modernity cycle of Radio Belgrade 3.
Over the past summer (2019), exactly 40 years later, I reworked the piece for an ensemble of three instead of five performers.
I based the piece on the four main elements of nature, as defined by Empedocles in ancient times, meaning that the piece is underscored by a recorded background comprising the sounds of water, fire, air, and earth. Earth is symbolically represented by instruments, but that segment of the work’s musical text does not seem to part from the sound of natural forces, but, rather, strives to blend with them.
I owe the work’s title to Isidora Sekulić.
In her book on Njegoš, she writes that the poet ‘holds death on his palm, like a little bird that can do him no harm’. I was impressed by this image of death meekly perched on the poet’s open palm, while he offers it a moment of respite. I adopted it in my belief that harmony is possible even when it is unexpected, that there is a connection and causality among all things, and that humans, sooner or later, find a way to reach harmony between themselves and time, themselves and the world surrounding them, and, finally, between themselves and nothingness.