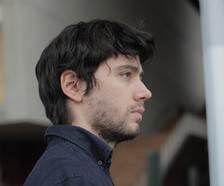 Emre Sihan Kaleli (1987, Turkey/Austria) studied and acquired professional experience in four countries: Turkey, Uzbekistan, the Netherlands, and Austria. He had the opportunity of developing close artistic connections with certain soloists and collectives: Matthias Arter (oboe, Switzerland), the Omnibus Ensemble (Uzbekistan), the pre-art soloists (Switzerland), the Nieuw Ensemble and the Ensemble Modelo62 (the Netherlands). These collaborations played a significant role in his artistic development. Perhaps a natural consequence of having lived in countries that are culturally significantly diverse, heretofore his work has not been focusing on one singular aesthetic direction or style: most of his compositions strongly differ from one another, displaying a plurality of aesthetic directions and accompanying technical tools. It can however be observed that his music strongly tends to be expressive – it is impulsive with frequent and abrupt changes, and rich in the sense of diversity of musical scenes and situations that it presents.

Five Love Songs for chamber ensemble
In this piece, I aimed to create a continuous stream of different thoughts and emotions. It is not only that the consecutive sections significantly differ from each other, but also a number of contrasting layers are often superimposed, i.e. presented simultaneously. The music is dynamic with often and abrupt changes and goes to unexpected directions. The piece is inspired by the fictions of the Argentine writer Jorge Luis Borges.