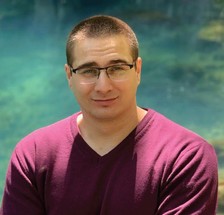 Lazar Đorđević (1992, Serbia). Đorđević began studying composition at the Faculty of Music in Belgrade in 2010, under the supervision of Prof. Zoran Erić. He is currently in his final year of the doctoral programme in composition at the same institution. Đorđević has also pursued further training abroad, attending composition workshops led by composers such as Peter Ablinger, Vinko Globokar, Stephen McNeff, Sidney Corbett, Johannes Kretz, Yann Robin… Works by Lazar Đorđević have been performed multiple times in Serbia and abroad. In addition to his own compositions, a number of Đorđević’s orchestrations of pieces by other authors as well as his works in the domain of incidental music have also been performed. His work titled Jednom sam negde čuo… (I Once Heard, Somewhere…) for clarinet, accordion, and string quartet (2016) won the best composition award at the New Serbian Music for Accordion competition of the Euphonia International Festival of Accordion and Chamber Music. Đorđević also won the 2015 Stevan Hristić Award as well as the 2017 Josip Slavenski Award. Đorđević composed the first concerto for accordion and orchestra by a Serbian composer, which was premièred in 2017 in Novi Sad. He is currently employed as a teaching assistant at the Music Theory Department of the Faculty of Music in Belgrade.

Trinity for 15 instruments was specially written for the 28th International Review of Composers. As the title suggests, the work was inspired by the number three, which comes up in the course of the work in various ways. The poetics of the work presents a sort of synthesis of its author’s interests and experiences in his career thus far. Its harmonic component for the most part comprises harmonic series based on certain notes.