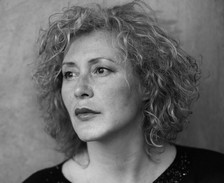 Works by Jovanović have been performed many times, in Serbia as well as in Europe, the United States, Canada, and South America. Also, Jovanović is active in the field of applied music and multimedia, as well as music production. She has won multiple prizes and awards. Jovanović has sat on the juries of multiple international composers’ competitions. Jovanović teaches as an full  professor at the Composition Department of the Faculty of Music.

The work Falcon was inspired by a performance of Rukoveti (Garlands) by Stevan Mokranjac, arranged for a quartet of double basses, thus the form of Falcon follows a similar principle to a large extent.