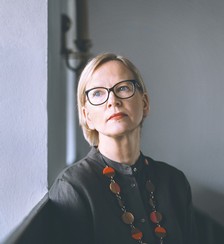 Diana Čemerytė (1974, Lithuania) graduated music theory at Vilnius Conservatoire in 1994, whereas in 2000 she finished her master’s studies in composition with prof. Osvaldas Balakauskas at the Lithuanian Academy of Music and Theatre. In 1998–2001 she worked as the editor and presenter for Lithuanian National Radio’s classical program. Between 2003 and 2006 she studied musicology at the Johann Wolfgang Goethe University in Frankfurt am Main.

Diana Čemerytė participated in a numerous composition courses and courses of Gregorian chant given by Toshio Hosokawa, Helmut Lachenmann, Beat Furrer, Brian Ferneyhough, Godehard Joppich and many others. She is a regular guest at festivals and concerts of contemporary music in Lithuania, Austria, Cyprus, Serbia, Poland, Germany, Great Britain. Her compositions are featured in various international festivals – for example the Kasseler Musiktage, (2005, 2009), International Summer Courses for contemporary music in Darmstadt (2006), European Chamber Music Days in Ravensbrück (2003), Festival Gaida (2005), International Thomas Mann Festival (2017), Jauna Muzika festival in Vilnius (2016), 28. International Review of Composers in Belgrade (2019), Baltic Music Days in Tallinn (2021) and others.

Diana Čemerytė has received numerous scholarships and prizes, among others the Mozart-Stiftung scholarship, ad libitum 2019/20 Composition Competition. Her works include chamber music, choral music, orchestral works and two operas for children. As a freelance composer, Diana Čemerytė currently lives near Frankfurt am Main. Her sheet music is published by Furore Verlag.

Mondgesang (Moon singing) for recorder and accordion (2018) is a very personal work of mine. In 2018 I worked on the compositions for my first portrait CD and I decided to compose a new piece for recorder and accordion. I was looking for a suitable idea, when I unexpectedly received a message about the serious illness in my family. At the same moment as I put the phone back, I went to the music paper and wrote down the first bars of the Moon singing. I wrote down my soul, with all the feelings and emotions from that time, including beautiful moments from my childhood, as in the section from bar 79 to bar 92, where a deep, humming second alto part occurs in counterpoint to the bass flute. It reminded me of my mother‘s singing: she has a very beautiful, deep, velvety alto voice. The piece encompasses a wide range of my emotions, very authentic and genuine, and that is precisely why I am very happy that this composition received the prize for the best composition in the category of chamber and instrumental music in 2019 from the Lithuanian Composers‘ Association.