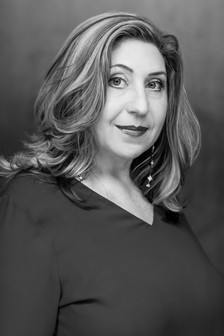 Natasha Bogojevich (1966) studied piano and composition (with Prof.  Srđan Hofman) at the Faculty of Music in Belgrade. She attended courses for electroacoustic music (Electronic Music Studio Radio Belgrade) and film music (with Ennio Simeon) in Italy.

Since 1995, she lives in Chicago where she continues her concert  and composer’s career. She has been on the faculty of De Paul University in Chicago as well as her own Music Studio Musica Natasha.

She is the recipient of many awards for composition: in 2017 she bestowed the prestigious American Joseph Jefferson Award for Outstanding Achievement in the Category of Original Music. Other awards include Top 10 at the UNESCO’s Rostrum of Composers in Paris, October Prize of the City of Belgrade, Radio Belgrade Encounters Award etc.

Major soloists, ensembles and orchestras have performed her music on four continents. Her biography appeared in several books including all editions of Who is Who as well as The World of Woman in Classical Music by Dr. Anne Gray (Seven Locks Press, 2007).

Composition was written for the concert La follia and premiered at the Cinema Balkan Hall in Belgrade in November of 2019. Violist Saša Mirković invited composers to explore one of the oldest known musical themes La follia as an inspiration for their music as well as a reflection of the present moment in time.

The structure of my work could be explained as a “renewed passacaglia or chaconne” and just like the original form, it keeps a typical slow tempo and triple meter. In this type of variation form, the harmony takes the place of a ground bass to provide unity, while the free flow of expressive melodic particles above it results in variety. These particles are the reminiscence of the “la follia” theme by Corelli or Vivaldi. The variations do not have a traditional nor progressive flow, sometimes they consist of repetitions of a nuclear motive, while other times the theme becomes a dance. Between these variation-like segments, we can hear the glimpse of an echo in the background, as a reminiscence of the Baroque La follia theme.