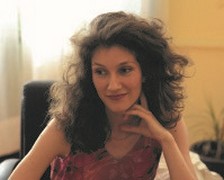 Ana Kazimić (b. 1985, Serbia) graduated from the Academy of Arts in Novi Sad with ballet music Love – The Power of New Awakenings. She completed doctoral academic studies of composition at the Faculty of Music, Belgrade, with a dance fantasia Muerto de amor for vocal-instrumental ensemble, electronics and dancers, supervised by professor Zoran Erić. She works as an Assistant professor in the artistic field of composition and conducting at the Faculty of Arts in Niš.

Ana was the winner of the young composers’ competition held under the auspices of the Triorca project initiated by Norfolk County Council’s Music Service, England. At the International Composition Competition commemorating the 1700th anniversary of the Edict of Milan, her piece was awarded as the best one. She was among the five young composers in the world selection for Aurora Fine Arts Festival in Stockholm. One of Ana’s works was selected by the ISCM committee to be performed at the World New Music Days 2020 in New Zealand.

Sol Invictus – The Invincible Sun which can be every man’s guiding light, internal strength and visionary mission. During one segment of the score, the parts of the string orchestra visually form a monogram of letters „Hi“ and „Ro“. Both symbols have multiple meanings, and they are brought together by the personality of the Roman Emperor Constantine the Great, born in the city of Naissus (today Niš). The piece was composed for voice and string orchestra, with possible versions for solo instrument and string orchestra.