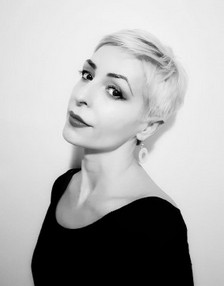 Darija Andovska (b. 1979, North Macedonia) graduated composition in Skopje. She completed her MA degree in the class of Isabel Mundry at the ZHdK in Zürich, Switzerland, and DMus studies, under the mentorship of Chaya Czernowin at the Harvard Institute, USA. She is the author of chamber, solo, orchestral, symphonic, choral, film music, theater, dance and multimedia projects.

Darija Andovska was the winner of important competitions, and she received awards and nominations for her film and theater music all over the world. She was selected for the European project MusMA (Music Masters on Air) as one of the best young composers in Europe for 2013/2014. She received two Virtuoso Awards (2013, 2015) for Best Composer in Macedonia. She won the Cultural Honor Award of the City of Zürich – Best Composer in 2014/2015. Andovska was the Macedonian music ambassador for the project CEEC 16+1 between China and central- and east European countries for 2016/2017 and 2018–2020. She received the state prize Panche Peshev in 2018 for highest achievements in music art.

The piece was written for and dedicated to Saša Mirković & Ensemble Metamorphosis.

Saša Mirković about daMar: “Something like this: It is neither world music nor pop song, but an art piece of high quality, a piece which carries a very strong and clear message. The meeting place of ‘kafana’ (a traditional pub) and concert hall, tradition and contemporary moment, emotional and personally lived state in which we all currently reside.

Darija Andovska has written daMar skilfully and masterfully, the piece that is sure to raise many questions. I don’t know whether she could have done it any more personal, but this is her cry and a signal to all of us to think, to protect, to cherish and to love what we are, and to remain the only owners of our own soul.”