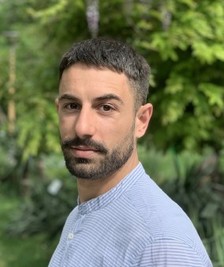 Jug Marković (b. 1987, Serbia), graduated from the Faculty of Music in Belgrade, where he studied composition with Vlastimir Trajković and Zoran Erić. He also completed studies of archeology at the Faculty of Philosophy in Belgrade. He pursued further studies at IRCAM in Paris in the field of electronic and computer music, as a recipient of the scholarship of the French Government. He currently resides in Stuttgart where he is pursuing specialist studies (3rd cycle) at the HMDK Stuttgart under the supervision of Marco Stroppa.

Jug Marković is the laureat of the Stevan Mokranjac Award 2019 for his composition De Rerum Natura for orchestra. He won the First Prize of the New Classics Competition (organized by the Moscow Conservatory Tchaikovsky, 2020) for his String quartet Neon Seed, as well as the Third prize of the International Competition Sofia Gubaidulina in Kazan. Marković is also the recipient of the ISCM Young Composers Award 2019 for his choral work Nirvana, which was performed by the Latvian Radio Choir at the World New Music Days in Tallinn. He was the delegate of the Composers Association of Serbia at the same festival.

His music has been performed at the renowned festivals such as the Donaueschinger Musiktage, Festival d’Aix-en-Provence, Dublin New Music, Time of Music, ManiFeste, ISCM World Music Days. He has collaborated with the world renowned contemporary music ensembles such as the Ensemble Intercontemporain, Mivos Quartet, Diotima Quartet, Divertimento Ensemble, Latvian Radio Choir, Chamber Choir Ireland, as well as symphony orchestra among which the Gulbenkian Orchestra and Brussels Philharmonic. He has also collaborated with many Serbian ensembles such as the Ensemble Metamorphosis, RTS Symphony Orchestra, Construction Site Ensemble.

The electronic part of this music consists of the sounds produced on the Synthi 100, as well as fragments of archival recordings of music by unknown authors produced on the same instrument during the 1970s at the Electronic Studio of the Radio Belgrade. These materials were processed, transformed, sometimes changed beyond recognition, and sometimes, on the contrary, treated with an intent to preserve the archaic sound.

Similarly to the majority of his precedent works, in Snake Fiction Jug Marković’s approach to compositional process is both conscious and deliberately intuitive. He he tries to refrain from strict and rigid premeditated concepts and formalistic systems. Marković is attracted to an energetic sound, to intense and saturated sonic spaces, as well as to occassional stylistic ecclecticism.

His music has no extramusical meaning.