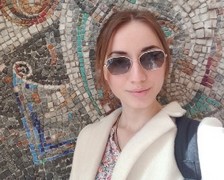 Vladica Mikićević (b. 1994, Serbia) completed her undergraduate and Master studies of composition at the Faculty of Music in Belgrade in the class of Tatjana Milošević Mijanović. She is currently pursuing the Doctoral academic studies of composition and working as a Junior Researcher at the Faculty of Music, where she also obtained BA and MA degrees from the Solfeggio and Music Pedagogy Department.

Vladica Mikićević is the initiator and producer of the event Miris stvaranja (The Bouquet of Creation) which unites and promotes the music of young composers from Serbia and Republika Srpska. In 2017 she was one of three participants who coauthored the paper “Escalator to Parnassus” which analysed the influence of Ancient Greek and Byzantine music on the creativity of Serbian composers in the 20th and 21st Centuries (the paper was presented at the International Musicological Conference Modus-Modi-Modality in Nicosia). She performs as a pianist and conductor, and she actively composes incidental music for theatre. She is a member of the Composers Association of Serbia and SOKOJ.

The piece Sparkling Dark (2022) for electric viola was commissioned by the violist Rastko Popović. The composition is inspired by the light of stars: their twinkling creates certain light variations which are transferred to the musical construction procedure by means of bringing to life the idea of immobility and motion. This idea is reflected mainly in the melodic, harmonic and rhythmic aspects of the composition; it moves the musical idea on a higher or lower plane, depending on the strength and amount of light that are being displayed. The piece is dedicated to my grandmother Radmila Mikićević, whose limitless energy and brightness follow me always.