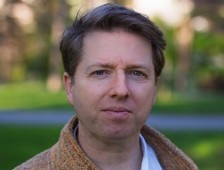 Ian Wilson (b. 1964, Northern Ireland) has composed more than 200 works including operas, a range of orchestral and chamber music, and multimedia pieces.

His compositions have been performed and broadcast on six continents and presented at festivals including the BBC Proms, Venice Biennale and Gaudeamus and at venues such as New York’s Carnegie Hall, London’s Royal Albert Hall, Amsterdam’s Concertgebouw and Tokyo’s Suntory Hall.  There are over 30 commercial recordings of his music available.

In 1998 he was elected to Aosdána, Ireland’s national association of creative artists, and since then he has been AHRB Research Fellow at the University of Ulster and “An Foras Feasa” post-Doctoral Research Fellow at Dundalk Institute of Technology as well as composer-in-association with California’s Camerata Pacifica ensemble, the Ulster Orchestra, and the Hard Rain SoloistEnsemble. He was director of the Sligo New Music Festival from 2003 to 2011.

When I lay my hand (2019) is the title of a poem by Irish poet Tony Curtis, a writer whose work I have set to music a number of times. When Elizabeth Hilliard asked me to write her a “shadow” piece, some years after (I thought) I had finished writing such pieces, I was intrigued as to how this would work with text. The pieces I formerly wrote in that series are all instrumental, mostly solo, where the first half is recorded as it is performed and then immediately played back so that the new material of the second half joins with it to make a duet. In order for this approach to work with voice and text I realized that whatever poem I chose would have to make some kind of sense when only every other line is heard and then make even more sense when the missing lines are added in the next layer of music. Fortunately Tony Curtis’ poem does just this – it was an almost unbelievable stroke of luck coming across this little poem, which Tony had given me some years earlier on a single sheet of paper. So the musical setting for solo soprano is in three layers, the form facilitated through the use of a loopstation – the 1st provides some timbral and harmonic context, the 2nd adds to that with a performance of half of the poem and the 3rd completes the text and fills in the final colours, as it were.

When I Lay my Hand by Tony Curtis

When I lay my hand flat
on the wooden table,
I think of water
against the side of a boat,
of earth
folded round a coffin,
of the axe’s cold blade
cleaving the grain,
of the bird’s claws
on the branch.

When I lift my hand
and take it away,
I think of autumn
and the sadness of leaves,
and of how the wind
tries to wake them,
to carry each battered soul
back up into the trees.