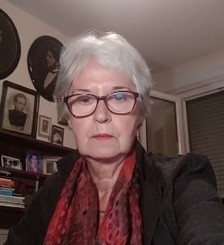 Ivana Stefanović (b. 1948, Serbia) graduated from the Music Academy in Belgrade. She continued her specialist studies at the IRCAM (Institut de Recherche et Coordination Acoustic/Music) in Paris.

She worked at the Belgrade Radio and Television between 1966 and 1992. She was the artistic director of the Belgrade Music Festival – BEMUS, State secretary at the Ministry of Culture of the Republic of Serbia, member of the first National Council for Culture of Serbia. She led the Center for Music Action and she was actively involved in the music festival BUNT in Belgrade. She is a member of the Composers Association of Serbia and Serbian Literary Guild.

Ivana Stefanović is interested in the boundary areas of music, including radiophonic and stage music, and she is also active in the field of literature. She collaborates with literary magazines. She has published three books: Put za Damask (prose, Geopoetika), Muzika ma od čega (essays, Arhipelag), and Privatna priča, prema sadržaju jednog kofera (her family’s history, Službeni glasnik & Arhiv Srbije).

Ivana Stefanović has won a number of awards and accolades, in Serbia and abroad.

The piece Ovog puta me pustite da budem srećan – prema Pablu Nerudi [This time, let me be happy – according to Pablo Neruda] for flute and double bass was written in 2019. It was performed for the first time at the Belgrade Music Festival (BEMUS) as an encore at the end of the concert which celebrated 40 years of artistic work of the flutist Ljubiša Jovanović. On that occassion, in agreement with the artists, the title and author of the piece were not revealed to the audience. After that, we had to wait for the pandemic to give in a little bit so that the piece could be performed again. It happened at the concert ARS vs CORONA in June 2020, at the time when we were still seated at a distance from one another.

The name of the poet Neruda had to be included in the title of this little piece because his message has a healing effect, and happiness, „with all or with noone,“ is increasingly precious.

The piece is dedicated to my friends, the flutist Ljubiša Jovanović and double bass player Stevan Jovanović.