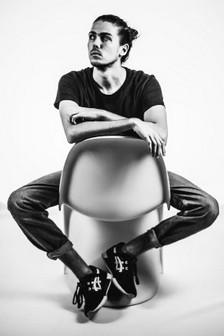 Eliott Delafosse (France) is a composer and sound artist based in Brussels.

He is very interested in the interaction between electroacoustic and instrumental writing, and the ambiguity that can exists at their border, his experience in electronic music feeds his acoustic work, and vice versa.

He studied composition with Claude Ledoux and Applied & Interactive Music with Denis Pousseur and Jean-Luc Fafchamps in Mons Royal Conservatory.

His works have been performed internationally by various ensembles.

He won the Henri Pousseur Center’s Prize in 2018 and the Prix André Souris (Forum des Compositeurs) in 2021.

He is currently preparing two premieres within the frame of Ars Musica.

Another aspect of his work includes soundtracks for several short-movies, dance performances and theater.

He also works on musical installations and performances, in collaboration with other composers. He is a member of the experimental electronic music duo MNPL with Andrea Tonero, pianist, improviser and performer.

Thinking about the ensemble not as a group of five players but as a meta-instrument able to offer specific timbral possibilities, I tried to explore musical objects that were compelling to me.

The first part focuses mainly on homorhythm. I limited myself to a noise-oriented sound palette, letting a few pitched sounds stand out of it. I conceived this section as a cathartic dance, nervous, almost primitive.

In the second part, I wanted to explore the relationship between micro-intervals and harmony, with a more idiomatic musical writing. By using a modal basis enriched with the micro-intervals, I tried to create a feeling of both familiarity and singularity.

The two parts are contrasting, the second being based on a complex polymeter played by the piano. The other monodic instruments are used as inverted resonances, highlighting fragments of the counterpoint. Although it is more meditative, I conceived it as the other side of the coin, another aspect of repetition, also leading to trance.