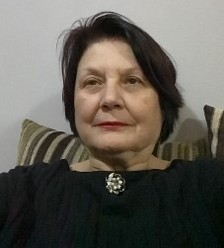 Svetlana Maksimović (b. 1948, Serbia) completed her studies of composition in Belgrade, with professor Vasilije Mokranjac. After the completion of her studies, She obtained her PhD degree in Toronto, in February 2006. She continued with her activities in the fields of music pedagogy and composition in Toronto as well.

She is the author of music for solo instruments, for various chamber music formations (both standard and non-standard), as well as several works for symphony orkestra. In the past several years two of her pieces were premiered: Refleksije (in June 2019) and Vitezi muzike (in 2021). The majority of her works were performed or recorded by the eminent musicians in Serbia and in Canada.

Usually we do not respond to the life events directly, at least not in music – unless it is commissionned or ‘incidental.’

This time, it has been different, with a simple piece for piano entitled Između meseca i opustelog predela [Between the Moon and the Desolate Space], composed in the summer of 2021. In January that year, I spent 17 days in the hospital due to the COVID infection. It was not too easy and not too serious, but the hospitalisation was necessary. Many people, before and after that time, got ill and some of them did not make it. The lasting exhaustion and indifference persisted for many days following the stay in the hospital. Only during the summer, I succeeded in formulating some thoughts about that state of mind, using the piano as a medium.

It is a very unusual condition, and I assume that it is also known to other people. Wasted vitality, it feels so bad! And what a feeling of general emptyness, as a consequence of possible extension of this condition.