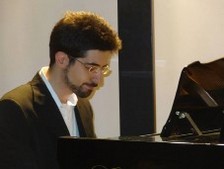 The piece Il culto del dio Fujin describes the prayer of a pilgrim on a mountain. He prays to Fujin, the Japanese wind god. The piece begins with several references to the element of air, through which you can hear the voice of the god Fujin. When the winds have subsided, the pilgrim begins his prayer to Fujin, who responds with the melodic fragment previously heard and entrusted to the voice of the performer. The pilgrim becomes more enterprising, trying to approach the god in a spirited manner, sure of having entered into his graces. Fujin rejects him! The winds return and the voice of God among them, angrier than before. The second invocation gradually transforms into a new twister that tests him. Fujin is convinced by the man’s soul and agrees to rejoin with him. The piece ends with Fujin’s voice manifesting itself and guiding the pilgrim towards the final destination.