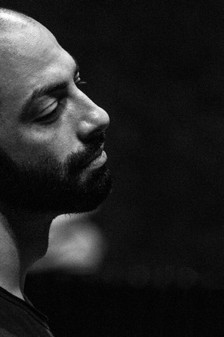 Draško Adžić (b. 1979, Serbia) acquired his doctoral degree in composition from the class of Professor and Academician Isidora Žebeljan at the Faculty of Music in Belgrade, where he currently teaches as an assistant professor.

He is active as a composer for theatre, film and TV. So far, he has written music for more than 50 productions in Serbia, Germany, and in the region. His incidental music could be heard in numerous festivals such as the Berlinale, Neue Stücke aus Europa (Wiesbaden), Raindance (London), Ulysses Theatre Festival (Brijuni), Dubrovnik Summer Festival, MESS (Sarajevo), FEST, BITEF, Sterijino pozorje. He was selected as one of the artists who were selected to represent Serbia at the 13th Prague Quadrennial. He was twice the laureate of the Sterija Award and he was a jury member at the 51st BITEF festival.

Baba Pusta, Study no.6/ogled iz generativne muzike za klavir i elektroniku belongs to a series of compositions in which I deal with the relationship between the accoustic and seemingly accoustic media, while trying to make the borderline between the instrumental and electronic parts as permeable as possible, even imperceptible.

The main premise of these studies is that the entire sound material of the electonic part is of accoustic origin. In the piece Baba Pusta, I manipulated the sound recordins of the preconceived motives by the processes of equalisation, sonic collage montage, superposition of motives, repetition of segments and time stretching and speeding up in such a manner that the resulting material sounds like a product of a minute and sophisticated use of a looper and delay.

Baba Pusta (Babapuszta) is the castle on the north of Bačka, built at the beginning of the 20th century. Just like many similar buildings in Vojvodina, this once magnificent edifice is now completely neglected and left to ruin. In the human nature there exists a morbid fascination with such localities because when we are faced with the abandoned, ruined settlements and buildings, we are obsessed to the point of fetishism by the feelings of mistery, curiosity, and even fear. All this is rooted in the pagan animism, the template which represents the most common source of inspiration for me, and the piece is a transposition of my innner experience of such a landscape.

Baba Pusta was written as a commission from Neda Hofman-Sretenović, to whom the piece is dedicated.