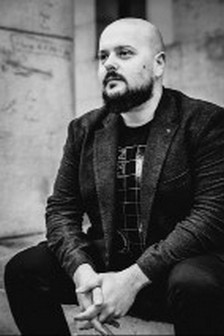 Tomislav Oliver (b. 1987, Croatia) graduated in Musicology  and Composition from the Music Academy in Zagreb, where he studied with Marko Ruždjak. He continued with postgraduate studies in composition at the Mozarteum, Salzburg, in the class of Stephan Winkler, and subsequently at the ESMUC, Barcelona in the class of Mauricio Sotelo. Currently he is attending studies of electronic music composition and sound design at the University of Music and Performing Arts Graz (KUG), with Marko Ciciliani and Franck Bedrossian. He also participated in master classes and workshops with Nigel Osborne, Raphaël Cendo, Stefan Prins, Rebecca Saunders, and many others.

He is the author of music for experimental films, ballet and contemporary dance. He collaborates with numerous artists from different fields of art, notably his friends from the NAE artistic collective, which places emphasis on experimenting with electronic music, sound design and audio-visual projects.

Since 2017 he has been active as a member of the Programme board of the Music Biennale Zagreb. He has worked at the Department of Composition and Music theory of the Music academy in Zagreb since 2018, where he teaches 19th and 20th century music analysis.

idiōma I for cello and electronics opens the cycle of compositions in which I explore the sound relations between solo isntruments and their electronic transformations. They are envisaged as sketches or studies in which idiomatic writing for a certain instrument is problematized, and its possible reinterpretation in an ’unknown language’ is explored. My intention was to use the electronic means to create a sound habitus which reimagines the role of the soloist and the accoustic nature of the instrument. The piece idiōma I is a tryptich which confronts three concepts of thinking about the time in music, instrumental idioms, and formal elaborations.