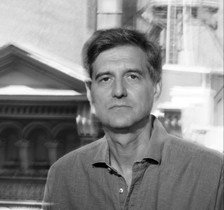 Milos Raickovich (b. 1956, Serbia), a composer and conductor, has lived in Belgrade, Paris, Los Angeles, Honolulu, Hiroshima and New York, where he now resides. While in Belgrade, Milos Raickovich was the founder of the Ensemble for Different New Music (1977), as well as one of the founders of the Borislav Pascan Youth Philharmonic.  Raickovich’s music has been performed in Europe, the USA and Japan.

Milos Raickovich studied composition with Vasilije Mokranjac, Olivier Messiaen and David Del Tredici; and conducting with Borislav Pascan, Pierre Dervaux, and Herbert Blomstedt. He holds a Ph.D. in composition from The City University of New York, and has taught at several universities in the U.S. and Japan.

I like to call my early style „Ascetic Minimalism.“ These early works enabled me to later develop my current „style,“ which I call New Classicism. The main motivation for writing Lovely Permutations was a desire to hear (and preserve) the music of permutations in a new instrumentation, and to combine various structures of several early works into a collage-like, single-movement piece.