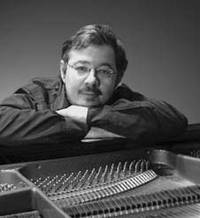 The instrumentations of Mussorgsky’s ‘Songs and Dances of Death’ and ‘Sunless’ vocal cycles, commissioned from Genin by the Russian baritone Dmitry Hvorostovsky, were performed under the baton of Valery Gergiev in St. Petersburg, Rotterdam and Brussels. In 2008 a CD of Genin’s In C est. 4/4:  Four Chamber Compositions for Four Performers were published by RCD, Prague. This year Olga Domnina recorded a new CD of Genin’s piano cycle Seven Melodies for the Dial, created especially for this remarkable musician. The New Grove Dictionary of Music and Musicians contains an article on Vladimir Genin.

We face an exhausting merge of silence-permeated static images and most intense stream of emotions when plunging into the world of the vocal cycle “Letzte Augenblicke” ( The Last Moments: Seven Songs for Voice, Cello, and Piano on texts by X. Evangelista), which becomes the emotional and conceptual core of the project in general, just as the Interlude is the triptych’s center. The cycle’s music is a confession. Its striking patterns, time and sound impress you with a lasting sensation of some bitter, but also fragile emotion. “Apart from anything the author wished or didn’t wish, could or could not express in the text, the words live their own life in such or another way, they pulse and breathe, they enter into dialogues with each other, they immediately give the music powerful impulses, and all you have to do is to pick up and amplify them. The idea of cello timbre is to make a counterweight to female voice, and this is how a kind of love triangle appears. As to the style, for me it is absolutely organic in all seven songs, although it varies all the time. Surely, theoreticians will see here a resort to elements of different composing techniques: minimalism, dodecaphony, and who knows what else…” (Vladimir Genin).